Laser pointers have the potential to permanently damage your eyesight if misused! Read and follow these safety precautions when using laser pointers!

A laser is a light source that can be dangerous to people exposed to it. Even low power lasers can be hazardous to a person's eyesight. The coherence and low divergence of laser light means that it can be focused by the eye into an extremely small spot on the retina, resulting in localised burning and permanent damage in seconds. Certain wavelengths of laser light can cause cataracts or even boiling of the vitreous humor, the fluid in the eyeball. Infrared and ultraviolet lasers are particularly dangerous, since the body's "blink reflex", which can protect an eye from excessively bright light, works only if the light is visible.

Lasers are classified by wavelength and maximum output power into the following safety classes:

Class 1: A class 1 laser is safe under all conditions of normal use. This means the maximum permissible exposure (MPE) cannot be exceeded. This class includes high-power lasers within an enclosure that prevents exposure to the radiation and that cannot be opened without shutting down the laser. For example, a continuous laser at 600 nm can emit up to 0.39 mW, but for shorter wavelengths, the maximum emission is lower because of the potential of those wavelengths to generate photochemical damage. The maximum emission is also related to the pulse duration in the case of pulsed lasers and the degree of spatial coherence.

Class 1M: A Class 1M laser is safe for all conditions of use except when passed through magnifying optics such as microscopes and telescopes. Class 1M lasers produce large-diameter beams, or beams that are divergent. The MPE for a Class 1M laser cannot normally be exceeded unless focusing or imaging optics are used to narrow the beam. If the beam is refocused, the hazard of Class 1M lasers may be increased and the product class may be changed. A laser can be classified as Class 1M if the total output power is below class 3B but the power that can pass through the pupil of the eye is within Class 1.

Class 2: A Class 2 laser is safe because the blink reflex will limit the exposure to no more than 0.25 seconds. It only applies to visible-light lasers (400-700 nm). Class-2 lasers are limited to 1 mW continuous wave, or more if the emission time is less than 0.25 seconds or if the light is not spatially coherent. Intentional suppression of the blink reflex could lead to eye injury. Many laser pointers are class 2.

Class 2M: A Class 2M laser is safe because of the blink reflex if not viewed through optical instruments. As with class 1M, this applies to laser beams with a large diameter or large divergence, for which the amount of light passing through the pupil cannot exceed the limits for class 2.

Class 3R: A Class 3R laser is considered safe if handled carefully, with restricted beam viewing. With a class 3R laser, the MPE can be exceeded, but with a low risk of injury. Visible continuous lasers in Class 3R are limited to 5 mW. For other wavelengths and for pulsed lasers, other limits apply.

Class 3B: A Class 3B laser is hazardous if the eye is exposed directly, but diffuse reflections such as from paper or other matte surfaces are not harmful. Continuous lasers in the wavelength range from 315 nm to far infrared are limited to 0.5 W. For pulsed lasers between 400 and 700 nm, the limit is 30 mJ. Other limits apply to other wavelengths and to ultrashort pulsed lasers. Protective eyewear is typically required where direct viewing of a class 3B laser beam may occur. Class-3B lasers must be equipped with a key switch and a safety interlock.

Class 4: Class 4 lasers include all lasers with beam power greater than class 3B. In addition to posing significant eye hazards, with potentially devastating and permanent eye damage as a result of direct beam viewing, diffuse reflections are also harmful to the eyes within the distance called the Nominal Hazard Zone. Class 4 lasers are also able to cut or burn skin. In addition, these lasers may ignite combustible materials, and thus represent a fire risk, in some cases. Class 4 lasers must be equipped with a key switch and a safety interlock.

This classification system is only slightly altered from the original system developed in the early 1970s. It is still used by US laser product safety regulations. The laser powers mentioned are typical values. Classification is also dependent on the wavelength and on whether the laser is pulsed or continuous.

Class I: Inherently safe; no possibility of eye damage. This can be either because of a low output power (in which case eye damage is impossible even after hours of exposure), or due to an enclosure preventing user access to the laser beam during normal operation, such as in CD players or laser printers.

Class II: The blink reflex of the human eye (aversion response) will prevent eye damage, unless the person deliberately stares into the beam for an extended period. Output power may be up to 1 mW. This class includes only lasers that emit visible light. Some laser pointers are in this category.

Class IIa: A region in the low-power end of Class II where the laser requires in excess of 1000 seconds of continuous viewing to produce a burn to the retina. Supermarket laser scanners are in this subclass.

Class IIIa: Lasers in this class are mostly dangerous in combination with optical instruments which change the beam diameter or power density. Output power may not exceed 1-5 mW. Beam power density may not exceed 2.5 mW/square cm. Many laser sights for firearms and laser pointers are in this category.

Class IIIb: Lasers in this class may cause damage if the beam enters the eye directly. This generally applies to lasers powered from 5-500 mW. Lasers in this category can cause permanent eye damage with exposures of 1/100th of a second or less depending on the strength of the laser. A diffuse reflection is generally not hazardous but specular reflections can be just as dangerous as direct exposures. Protective eyewear is recommended when direct beam viewing of Class IIIb lasers may occur. Lasers at the high power end of this class may also present a fire hazard and can lightly burn skin.

Class IV: Lasers in this class have output powers of more than 500 mW in the beam and may cause severe, permanent damage to eye or skin without being magnified by optics of eye or instrumentation. These are cutting, etching and surgical lasers. Diffuse reflections of the laser beam can be hazardous to skin or eye within the Nominal Hazard Zone.

The laser powers mentioned above are rough indications; the classification is also dependent on the wavelength and on whether the laser is pulsed or continuous. Also, even a high power laser may be assigned to a low safety class if it is enclosed so that no laser radiation can leave the case and injure a person.

For experiments in your science fair project, you should always use Class I or II lasers. The low power of these lasers will minimize the chance of an accident.

In addition, please be aware that a laser beam can reflect off of a mirror, lens, watch surface, jewlery, or metallic tool. Reflections often stay unnoticed until an accident occurs, so please take preventative measures to ensure your safety before turning on the laser! 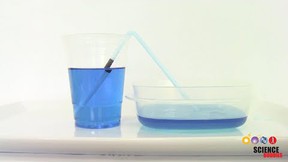 Make a Straw Siphon
Rainbow Fire: Where do Fireworks get Their Colors? 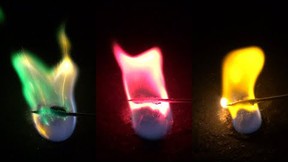 Rainbow Fire: Where do Fireworks get Their Colors?
Make a Slushy! Yummy STEM Project 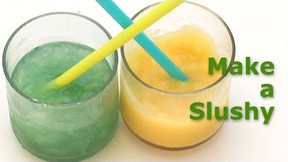 Make a Slushy! Yummy STEM Project
Quick Links X
Top
We use cookies and those of third party providers to deliver the best possible web experience and to compile statistics.
By continuing and using the site, including the landing page, you agree to our Privacy Policy and Terms of Use.
OK, got it
Free science fair projects.